I love these socks. They gave me so much trouble while I was making them, but I forgive them because they’re awesome. After a washing, the Louet Gems has gotten so soft. Lowell looked at the socks at one point and said “Those are pretty. They remind me of those dresses, like in King Arthur or Robin Hood.” So he gets all credit for the name. (If you don’t like the name, it’s his fault! Can’t blame me.) I love the French blue/copper combo; I’ll have to use that again sometime.

These are made using the principles in Cat Bordhi’s book, New Pathways for Sock Knitters. For those that haven’t found this great book, Cat realized that as long as you increase 2 stitches every 3 rows, it doesn’t matter where those increases are. I’ve put the increases so that they look like the typical top-down heel flap gusset, but the socks are knit toe up with no heel flap. Crazy, huh? The socks end up with a slightly longer gusset section, but it fits really well. If you’ve got New Pathways, feel free to insert your own Master Numbers into the pattern.

The only problem with this approach is that it makes the pattern much harder to write up (I guess that’s really my problem, not yours). This liberated increase thing is great, but if you’ve never read New Pathways it can be confusing. The increases used are lifted increases, instead of the normal M1s. You can, of course, use M1s if you prefer. Knotions has a great tutorial on lifted increases if you’ve never used them before. The part that really deviates from normal is the heel turn/”flap.” You’ll be knitting short rows for the bottom of the heel, but instead of working each row gobbling up one wrapped stitch to turn the heel, all the wrapped right-side stitches are worked right after one another in one row, then you turn and purl all the wrong-side wraps on one row. This ends up looking a lot like a standard top-down heel turn. Then, you’ll essentially be knitting more short rows, in that you won’t be knitting in the round yet. The “heel flap” is knit back and forth, but instead of wrapping stitches, you’ll ssk and p2tog to join the “flap” to the sides. This also gets rid of all the stitches increased during the gusset section. There’s some moving around of stitches, but it’s not too bad.

This pattern is written for 2 circular needles. If you prefer DPNs, just split Needle 1 and 2 in half, so that you have a quarter of the stitches on each needle. Sometimes (this is so silly) I think of my DPNs as Needle 1a, 1b, and Needle 2a, 2b instead of 1, 2, 3, and 4. I can’t help you if you’re one of those freaks that only uses 3 DPNs to hold the stitches. 😉 The pattern uses 5 colors, but the light blue in the center of the leg color work is optional. If you’ve got stash to bust, great. If not, the Ginger or the French Blue look great in that spot, or just keep using Caribou. Fewer ends to weave in that way! The top is one of my favorite parts, I think it looks like a crown; after the color work, a vikkel braid (from Folk Knitting in Estonia) is worked and then the sock is bound off using Elizabeth Zimmerman’s Sewn Bind Off. The edge flares out from the leg just slightly, which I wasn’t sure about at first, but has really grown on me.

Oh, and you’re not imagining things, the two socks in the pictures are slightly different… I tried putting some 1×1 ribbing on one to see how it changed the fit, but I didn’t feel like ripping it back out again when I realized it did nothing. Live and learn.

Edit 8/25/08: I’m sorry if the charts weren’t loading. I’m trying out some new blog writer software and I’ve had a lot of trouble with this post… anyway, I think I fixed the images.

Edit 9/13/08: If you’d like more information about the sock construction without the color work or stripes, check out this post.  Also includes information on sizing the socks.

LLinc (Lifted Left Increase): Pick up the left side of the second stitch below the last stitch on the right needle and place it on the left needle. Knit in to the back of this new loop. Knit the next st as normal. Picture tutorial here.

Tip: Try joining new colors 10-15 sts before they’re needed and carrying the tails forward 10-15 sts after they’re cut to reduce the ends you need to weave in. If that didn’t make any sense, check out the Weaving Ends In As You Knit Tutorial. If you’re doing color work, you probably have all the skills needed for this- it’s the same thing as catching a yarn to shorten a float, you just do it every stitch.

Round 4: Knit to marker, LRinc, slip marker (SM), knit to second marker, SM, LLinc, knit to the end of the round. 2 sts increased.

Join CC1 (Ginger) and work Rnds 2-3. Carry MC (French Blue) upwards by twisting the yarns at the beginning of the round.

Work Rnds 4 and 2-3 in MC (French Blue). Carry CC1 (Ginger) upwards by twisting the yarns at the beginning of the round.

Continue working Rnds 2-4 in MC (French Blue), starting with Rnd 3 until there are 100 sts total, ending after Rnd 4.

The short rows are worked back and forth on the sole needle (Needle 2).

Repeat Rows 2-3 until 12 sts have been wrapped on each side, ending after a WS row. 10 sts remain unwrapped in the center.

Row 1: Knit to first wrapped st. Conceal Wrap (CW) 11 times, until last wrapped st. Pick up the last wrap as normal, then (treating wrap and its stitch as one st) ssk with the last st on the left needle.

Row 2: Sl 1, purl to the first wrapped stitch. CW 11 times, until last wrapped st. Pick up the last wrap as normal, then (treating wrap and its stitch as one st) p2tog with the last st on the left needle.

Set up step: Move the 20 sts before the first marker from Needle 1 to the left side of Needle 2. Remove marker and replace marker between the sole sts and the moved sts. 55 sts on Needle 2.

Set up step: Move the 20 sts after the second marker from Needle 1 to Needle 2. Remove marker and replace marker between the sole sts and the moved sts. 74 sts on Needle 2.

Repeat Row 3-4 until 2 sts remain on either side of the gaps.

Knitting in the round resumes on the first round.

Work Vikkel Braid over all sts. 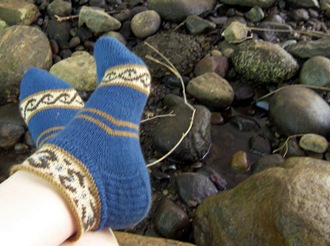 Please Note: I post my patterns as soon as I’ve completed them because I’m excited to share them with you. They have not been fully tested. But they are free. I’ve made every effort to make sure that the instructions are clear and error-free. There may be typos or pattern mistakes and if you find them or have any questions, please let me know by posting a comment or emailing me, dailyskein at gmail.com.

This work by Cailyn Meyer is licensed under a Creative Commons Attribution-Noncommercial-Share Alike 3.0 United States License.