I’ve been working on and off on the Estes Vest.  I’m almost done with the waist increases on the back!  Any time I actually devote a few hours to working on it, it goes very fast.  Sadly, I haven’t been devoting as much time as I’d like to it.  I was hoping that it would be finished by the time I left for the Balloon Fiesta next week, but unless I knit my fingers to the bone, I doubt that’s going to happen.  And of course I’ve thought of 5 other projects that I want to do at the same time.  Like this sock! 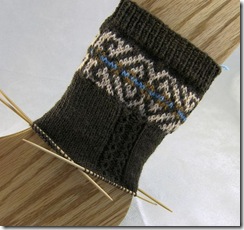 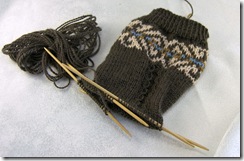 This sock (which has yet to find a name) was inspired by a number of things.  First and foremost, stash-busting!  I’ve still got a lot of Louet Gems Fingering yarn left over from an abandoned project.  I’m not really sure that this is the yarn I would choose for this sock normally, but it’s working out alright.  Second, I love the look of traditional/historical European socks with “clocks.”  Clocks are small twisted stitch or knit/purl patterns that go down the side of the leg and then split at the heel. One side goes down the heel flap and the other goes down the length of the foot.  The theory is they’re called “clocks” because they look like the hands of a clock.  Third, I’ve been reading the History of Handknitting, which is fascinating to me.  (I love the library!)  The pictures are all in black and white, which is unfortunate, but the author includes charts for a number of the early two-color knitting fragments.  The pattern above was found on one of the earliest known pieces of knitting.  (I added the second and third colors.)  Unlike traditional socks, my unnamed socks won’t be knee-highs.  I’ll probably knit a little further on the leg and then start the heel.  Actually, when I reach the end of the almost-finished ball of yarn I’m using then I’m going to start the heel.  I hate changing yarns in the middle of the heel flap.

Hopefully at least one of these socks will be finished before I head off to NM.  I’ve been thinking pretty hard about what knitting to take with me.  I think the vest will stay here because it just takes up too much space.  I want to start on a scarf/wrap using some of the Argosy yarn I got a awhile ago.  But I’m not sure that’s going to be portable enough.  I also have some Socks that Rock that I have a good idea for.  And a hat that I want to get done soon… Oy!  Too many projects and not nearly enough time.  And I have to be careful, because if I run into a problem with a project and want to change something (which happens at least twice a project) I won’t have my stitch dictionaries!  Scary thought.

In blog-related news, you may have noticed that I added a tab at the top of the page titled “Knitting.”  That page has a list of all the knitting patterns and tutorials on the site.  Last night I went through and added thumbnails to the list.  Much prettier.  Now I just have to do that for the other tabs!  Oh, and I added some progress bars for projects in the sidebar, since I’m working on multiple projects at once now.

Oh, and the jury’s still out on the Knit Picks needles… but when I’ve used them some more, I’ll be posting more information about them.  Actually, the needles are good, it’s the cable that I’m undecided about.  More on that later.