Hope you had a fun holiday.  We went on a nice long hike yesterday, up to a very pretty alpine lake.  It’s at the base of a mountain that we’re planning on hiking to the top of next weekend.  (Gotta get those last big hikes in before the rains come!  Because then those hikes’ll be covered in mud… then snow!)  No pictures, because, well, sometimes it’s nice to just enjoy the scenery with your eyes instead of through a viewfinder.  But man, I’d love to capture the color of that lake in a yarn or fabric… the light brown by the shore, the teal with the sun sparkles, and the dark blue in the center.  Beautiful.

I’ve also been taking some time and getting used to writing and publishing my posts with Live Writer instead of the WordPress writing-thingy.  I’ve tried out a number of other writers and I actually can’t remember all of them now that I’ve uninstalled them.  So far, I’m really liking Live Writer.  It’s got a number of neat features, like a link glossary for pages I link to a lot and it’s really easy to link to old posts.  Anyway, it’s got its own set of problems, too, which I’m trying to work around, like not center aligning when I tell it to.  The biggest problem I’ve run into so far is pictures.  It’s great not to have to upload every single picture by hand, but if I have to edit an old post, Live Writer uploads all the pictures every time I re-publish.  This sometimes leads to problems with image links and other nastiness.

Long story short, please let me know if there are any broken images or links.  And I hope that I’m not messing up anyone’s RSS feed or anything by having to publish posts multiple times to make sure the images are right.

That taken care of, let’s get to the interesting part of the post.  I’m starting to get into a real glove/mitten groove with the air starting to get a little nippy. (My hands are always cold).  A friend of mine a while ago was making the Queen of Diamond Gloves from Knit Picks, which I made 3 pairs of last year. (I think that’s the most times I’ve ever knitted the same pattern, although I did change the cuff for each…) She asked me to explain the Backwards Loop Cast On (BLCO) to her when she got to the part to divide the thumb.  So I demonstrated… Turns out this was how she casts on all her projects, she just didn’t recognize the name!  And I started to wonder if other people were confused about this.

This was the cast on I was taught as a kid.  I remember it was my favorite part of knitting back then; I was crazy fast at it.  It’s a very easy cast on to do, but it’s hell to knit.  Because it’s just a series of loops, the tension gets all off.  As you work a loop, it gets pretty loose, but then the next one is very tight.  It can become almost unworkable in long cast ons.  It’s not stretchy and gives a rather messy edge for large things, like socks, sleeves, and certainly sweaters.  I use the BLCO for casting on over gaps in thumbs/fingers for gloves and that’s about it.  I’ve heard that it’s a great cast on for lace, because it blends in perfectly.

In case you haven’t seen or heard of this cast on before, and you’re working on some gloves (hopefully the Snowflake or Albuquerque gloves, hehe) here’s a picture tutorial for you.  There are lots of ways to do this cast on (video, Knitty, Knitting Daily), this is just the way I learned.  This is different from “looping on;” in BLCO, the stitches are cast on twisted to make them a little more stable (but not much!)

Wrap the yarn around your thumb (I prefer left thumb) from the backside to the palmside or counterclockwise if you prefer. (I know that first picture has more sts on it than it’s supposed to).  Bring the needle in front/over the yarn coming from your thumb.  This makes a loop where the working yarn goes around your thumb and under the yarn on the needle. 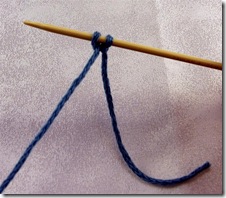 Insert the needle up through the loop you just made.  Drop the loop off your thumb and tighten gently on the needle.  I suggest keeping it fairly loose. 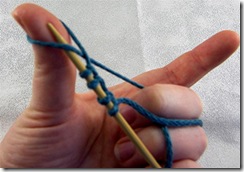 Repeat as needed.  You don’t have to do this cast on at the base of your thumb, or with your thumb at all; I’ve seen people do it with their index or middle fingers. I personally do this cast on at the tip of my thumb.  Remember that the cast on stitches are twisted; I like to knit them through the front loop on the next row.  I think it tightens things up better.

3 Responses to “Do the Loop de Loop”